The HUD, or Heads Up Display, is the official name for the information which surrounds the game window, such as the resource window, at the top, which tells how many of each resource you have (and the maximum of it you can have).

In GAE, you must hover over the unit's icon to see more information about the unit. In regular Glest and MegaGlest, they are shown directly in the unit infobox. 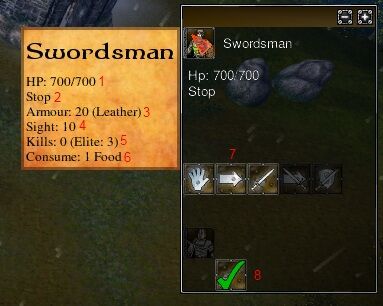 Aside from the looks of the GUI themselves, GAE is able to fully customize its HUD via a widget's configuration file, which allows full customization of the HUD, including menus and information displays. GAE can also move around its HUD by clicking and dragging. MegaGlest is able to display a single image which will be placed around the game window.

Community content is available under CC-BY-SA unless otherwise noted.
Advertisement